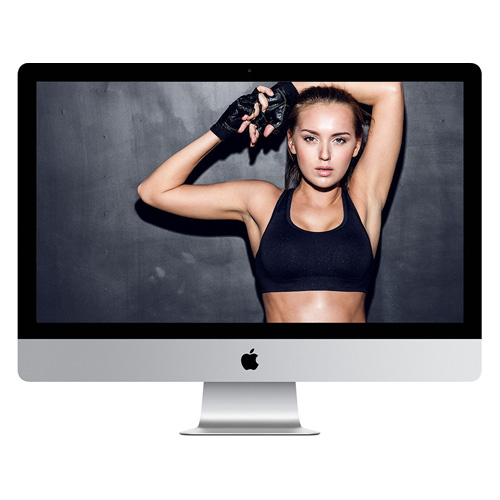 Ok, so you’ve finally given in and you’re going to treat yourself to a new, sleek, sexy iMac. Apple has finally roped you in with their “hip”marketing schemes on this beautiful monitor/computer combo. But you don’t want to be reckless, you want to do a little research first, don’t you?

Well then, you’ve come to the right place. I’m going to lay out the specs as well as the pros/cons of a iMac.

Introduced by Apple in October 2014, the newest version of the 27 inch iMac features a Retina 5K display, Apple’s supreme high resolution screen. What this basically means is the screen is a whole heck of a lot clearer and crisper than previous screens. In fact its visual excellence is the only major difference between this current model and earlier versions of the iMac.

Compared to earlier Mac screens the pixelation on this screen is barely noticeable if at all. This is what the 5K Display offers. From the desktop to videos you won’t get enough of this vibrant, bright screen.

Yet despite the inclusion of this revolutionary screen tech it’s still only 5mm thin at the edge. To give you a comparison that’s 2 mm THINNER than an iPhone 6. Slick stuff here, huh?

But if you’ve never owned a Mac before you’re probably wondering what the specs are outside of the 5K Display.

The specs, as I said, are the same as previous years so if you’re looking at buying an earlier, used iMac model, specifically the 2013, then these specs minus the 5K Display will be the same.

It’s got 8GB of memory but can be configured up to 16GB or 32 GB. That’s memory now, not storage space. It’s important to know the difference. Computer memory is storage for everything that needs to be accessed quickly by the computer like the programs and stuff you’re currently looking at or working on.

The storage space is 1 Terabyte but can be configured up to 3 Terabytes.

With a high-quality graphics processor and 2GB of dedicated graphics memory combined with the Retina 5K Display this guy is great for graphic design, photo editing, video editing, etc.

From corner to corner the screen is 27 inches and coming in at just 21 pounds it’s pretty lightweight especially considering that the computer and monitor are all in one.

Gaming is another thing altogether. Macs have never been highly regarded as great gaming machines. Not to mention the fact that you’ll still find a larger selection of games for PC than you will Mac. But this view is steadily changing and Mac is starting to come into its own with regard to gaming. With better graphic cards and more and more games being supported on the 27 inch iMac you’ll have a decent experience gaming.

But if you’re specifically looking to buy a computer for gaming purposes there are better (and cheaper) options out there than an 27 inch iMac. When it comes to price, graphics and availability of games Mac is not leading the race.

Here’s the kind of configuration you’re looking at in the back of this bad boy:

Pros – Robust graphics displayed in an uncanny Retina 5K Display, high durability performance and speed, aesthetic. The 27 inch iMac is great for office or home use.

Cons – Not your first choice for gaming and incredibly pricey compared to others. It is Mac after all, they’re not known for keeping things cheap.

So What Are We Looking At Price-wise?


So there you have it, the rundown on the 27 inch iMac. Apple continues to up their game and don’t show any signs of slowing. Let us know what you think and your experience with the 27 inch iMac.