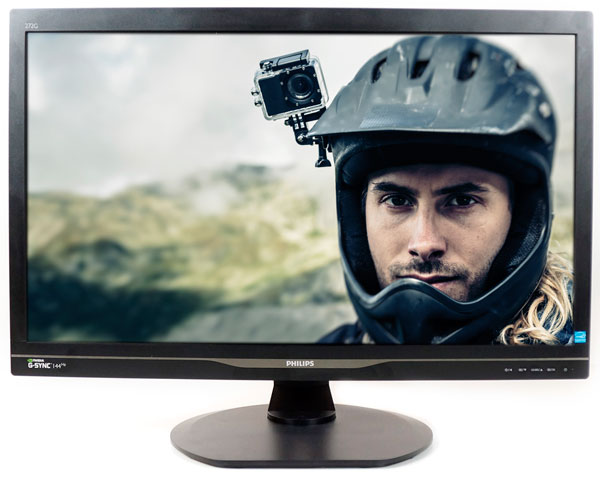 If you’re a gamer, especially a PC gamer, then it’s a safe bet you’re on the eternal quest for the perfect gaming set-up. You’ve invested in graphics cards, a gaming mouse or two, the best computer you can find. Now you’ve arrived here, looking for the best 27-inch gaming monitor.

Now, I can’t promise the Phillips Brilliance 272G5DYEB LCD Monitor with Nvidia G-Sync is the greatest 27-inch monitor for gaming on the market but it’s sure one of the best. It better be as it was released as a gaming monitor. That’s how it’s been marketed.

When it comes to gaming you’re looking for a few important factors, elements if you will. You’re looking for a high resolution, good refresh rate, good response time, a big enough screen (27 inch should do) and at least a decent set of connection ports. There are of course other nice perks that don’t hurt like anti-glare and IPS Panel.

If you’re not looking for a gaming monitor, then I may have lost you already. Let me attempt to reel you back in. If a 27-inch monitor is good for gaming, then it’s a very safe assumption that it’s great for almost anything else. But we’ll cover more on what kind of applications it’s good with later on in this review.

Let’s cover what the specs are in the Phillips Brilliance (or 272G5DYEB as Phillips has decided to designate it).

The specs are really where you’ll find out if this is the right monitor for you.

And obviously as the title suggests it has Nvidia G-Sync technology as well as Nvidia 3D Vision for 3D gaming and movies.

That brings us to our next question to answer:

What is Nvidia G-Sync Technology?

Nvidia G-Sync technology (try saying that ten times fast) is a fairly new display that provides a smooth and fast gaming experience. The way it does this per Phillips is by, “synchronizing display refresh rates to the GPU in your GeForce GTX-powered PC.” Say what?!

Basically what it does is it gets rid of screen tearing which is an issue with a lot of monitors for gamers whereby two or several frames are shown at the exact same time. Needless to say it’s less than ideal but Nvidia G-Sync handles that. It also dramatically reduces input lag and display stutter.

This results in a sharp, highly responsive gameplay that allows you to attain a competitive edge in online gaming as well as offline gaming. Again this also creates a better experience with any heavy-graphic applications like viewing HD movies.

It’s great for gaming as that’s what it was designed for. But I always say that if it’s good for PC video games which are high-activity, high-graphic applications then it’ll work for just about anything.

You can use the Phillips Brilliance 272G5DYEB LCD Monitor for any of the following:

What kind of price are you looking at?

The Phillips Brilliance 272G5DYEB LCD Monitor with Nvidia G-Sync (it’s getting tiring saying that full title over and over) will cost you $549.99 on Amazon.

So this 27-inch monitor holds up for gaming and other purposes though it suffers from lower resolution compared to its competition. You may notice the difference when playing but the positives definitely beat out the negatives with this one. If you have some extra coin, I also reccommend checking out the ASIS rog swift pg278q