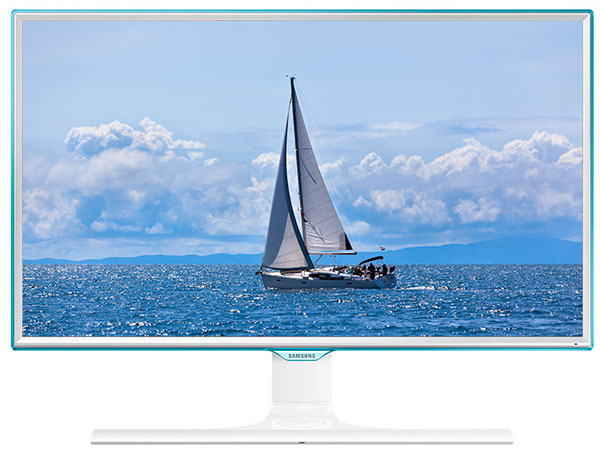 The “coming soon” Samsung S27E370DS (or SE370 if you prefer brevity) will make history by being the first ever 27-inch monitor, or monitor period, to provide wireless mobile charging using Qi wireless charging tech.

The monitor game these days is all about who can add the coolest features and provide the clearest picture. In this department the Samsung S27E370 doesn’t look like it will disappoint. Though the resolution isn’t as high as it should be there are enough features in this bad boy to make it worth considering.

So if you’re in the market for a new 27 inch PC monitor, read our breakdown of this monitor below and see if it might just be the right one for you.

Qi tech is really the go-to tech for wireless charging these days. As long as your phone is 1.6 inches or closer it’ll charge. The SE370 has Qi tech built right into the monitor stand. It’s simply a matter of laying your phone on the wireless charging pad and letting it do its thing.

Now of course the fairly new Samsung Galaxy S6 and S6 Edge are QI-enabled making it a perfect match for the Samsung monitor. Unfortunately, the iPhone isn’t Qi-enabled though there have been rumors that Apple has been toying around with the idea.

But don’t fret, there are plenty of other mobile phones that can take advantage of this great feature. Phones such as the LG Spectrum 2, HTC Droid DNA, Google Nexus 7 and the newly announced Lumia 950 and 950 XL by Microsoft.

Let’s take a look at the specs to see how it holds up in other areas.

It’s a PLS panel which stands for Plane-to-Line Switching. Basically this is Samsung’s IPS panel. They can’t call it IPS because LG has that trademarked. The PLS panel offers great viewing angles which comes in handy if you have several people huddled around the monitor.

So the connectivity isn’t fantastic but it’ll get you where you need to go. It’s missing at least one more HDMI port and a USB port would be nice as we definitely haven’t outgrown that technology yet. But this seems to be typical with Samsung monitors.

Gamers have a particularly big problem on their hands when it comes to refresh rate (first world problems, I know). Basically they are faced with the tough choice of choosing to allow image frames to be sent to their monitors the second they are rendered resulting in tearing when the monitor hasn’t refreshed yet or waiting for everything to be ready resulting in input lag.

It’s a damned-if-you-do, damned-if-you-don’t situation. What AMD FreeSync tech does is get rid of screen tearing without causing input lag. I won’t bore you with the details of how this works technically but since monitors started shipping with FreeSync back in March 2015 they’ve been very popular, especially with gamers.

While the Samsung SE370 hasn’t been released yet it’s safe to isolate the types of things it’ll work well with based off the specs that have been announced.

First the PLS is a great feature and so will allow for a rich color experience as well as good viewing angles. As we mentioned FreeSync makes it a gamer’s dream.

While the SE370 isn’t available yet to be scrutinized and raked over the coals, we have enough information to make an educated guess at its quality. It looks like it’ll work pretty well for gaming despite the low resolution. But hey that Qi wireless charging pad ain’t nothing to shake a stick at, offering something unique that no other monitor has.

When it comes to 27-inch monitors you can either go with a normal flat-screened one or you can go with the more unique curved PC monitor like the Samsung SE591C. While purists might write this off as a gimmick, there are some real advantages to owning a curved 27-inch PC monitor.

Starting with TVs, curved screens introduced us to a new way to view moving images. Curved screens aim to reduce eye strain and fatigue that can accompany staring at a monitor for hours on end but there’s more to it than that.

What’s the Advantage of Curved Screens?

Curved screens offer a more immersive experience by, in a way, replicating the way you see with your rounded eyeballs. We don’t just see things flat in front of us. We have peripheral vision and so perceive things to the side. Curved screens thus give a wider field of view.

Ok so there are some strong arguments as to why curved TV screens are a fad but these arguments don’t really hold up against curved monitor screens. Mainly the argument is that in order for you to properly view a curved TV you’ll have to be seated directly in front of it, properly centered. Surprise! That’s how we use our PC monitors.

In fact, the curved monitor works beautifully in a multi-monitor set-up as they all curve towards you for the best view of each one.

The answer of course is the Samsung SE591C

Delivering a crisp angled display is the job of a curved monitor and the 27-inch SE591C delivers exactly that.

While the resolution is not the highest you would hope for it does a decent job. I do wish it was at least 2560 x 1440 but unfortunately it’s not.

Let’s take a look at the specs to get a full view of what this bad boy can do.

So the connectivity isn’t fantastic but it’ll get you where you need to go. It’s missing at least one more HDMI port and some sort of USB port would be nice.

So being a curved monitor there are certain activities that the SE591C works best for. First would be gaming. With the curved screen you will feel more immersed while running and gunning or whatever type of game you play.

The resolution will work fine for gaming as well as video editing and photo editing although it’s not the best out there by far. With it’s response time of 4 ms you’ll be doing pretty good as a gamer, though the refresh rate of 60 Hz is also not the most optimum.

I keep making this point of “it may not be the best out there” because it’s honestly not. In terms of a monitor if you stack it up against another 27-inch monitor like the Dell UltraSharp U2715H or the Apple Thunderbolt Display it’ll lose on straight graphics and feature capabilities. BUT it is a curved monitor and that’s why you would be buying it. It is one of, if not the best curved monitors on the market.

All in all, the Samsung SE591C is a pretty decent monitor though may take some getting used to due to the curved screen. It’s recommended if you have a multiple monitor set up on your desk. And if you’re a gamer you might want to consider checking it out as it might just give you that extra edge in your gameplay.